What kinds of reinforcers should I offer? 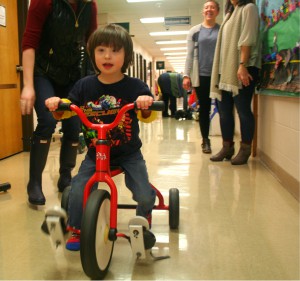 Reinforcers don’t need to be “big” or last a long time, as long as they are meaningful to children and reinforce the target behaviors. You can learn about what kinds of reinforcers might be meaningful by conducting Preference Assessments, observing your children, or simply asking children what they would like to work for. Since independent group contingencies make it possible for each child to have a different reinforcer, allow each child the opportunity to choose his or her own reinforcer every day, and provide a visual (e.g., affixed to each token board) to remind each child what he or she is working toward.

Remember to make reinforcers available only when a student meets his or her goal, and be sure to tailor your reinforcer options to the interests of your students. Because each child is working toward an individual reinforcer, it is especially important to ensure that each child earns his or her terminal reinforcer at least once per day. This may entail providing additional assistance, using prompting procedures to ensure correct responding, or modifying target behaviors to be appropriate for each child. Here are some sample individual reinforcers to help you get started:

Here’s a real classroom example of an independent group contingency in action:

Mandy used an independent group contingency called the STAR Chart Individual Reward System in an inclusive preschool classroom of children ages 4-6. (Note: the STAR Chart Reward System was later adapted into the STAR Chart Group Reward System, which you can read about on the Dependent Group Contingency page.) Her class contained a wide variety of learners, including learners with developmental delays. The STAR chart served to reinforce class-wide rules that made up the pneumonic STAR:

Each student had his or her own STAR chart, which was an individual token board that had space for five tokens, as well as a space to affix an icon of the terminal reinforcer. Every time a student earned five tokens, she received her terminal reinforcer and started token collection over again. Once students had mastered the use of the STAR chart system, Mandy’s team systematically taught the students how to reinforce one another’s behaviors. With the teaching team’s assistance, students were able to consistently and effectively reinforce one another’s appropriate behaviors.

Preparation: To prepare the STAR Chart Reward System, Mandy’s team printed and
laminated a star chart for every student. They laminated and cut out stars, and affixed Velcro® to the back of each star. They also laminated and cut out icons representing the different terminal reinforcers that students could work toward. 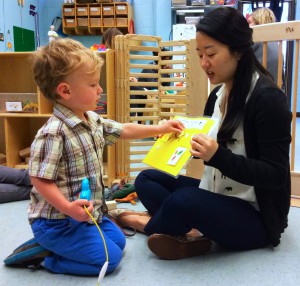 During morning circle time, Mandy and her team
reviewed the target behaviors for the day. Throughout the day, all teachers on the team (as well as visiting teachers, therapists, and specialists) delivered laminated stars to students for engaging in behaviors that were consistent with the class-wide rules. For example, a teacher might give a child a star token for using walking feet in the classroom (i.e., being safe) or raising her hand during circle time (i.e., being respectful). The team members also reminded students throughout the day what they were working toward. The team checked in frequently with one another to make sure all children received token reinforcement several times each day.